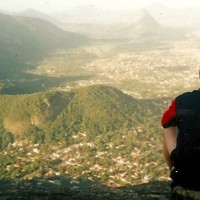 In life there are plenty of villains.

The social system in most countries allows plenty of opportunity for those of a less reputable nature to take advantage. Lies, corruption, unspeakable acts of cruelty, war and death rear their alarming tones regularly on the news. Why does this happen and what will you do about it?

I was once in a situation that could have gone horribly wrong.

There have been many such moments for me, but I will share one that stands out. Whilst in Brazil at the turn of the century I ended up lost on the way down what became a dark mountain (the caption photo here is the view from the top). The full details of this deserve a separate account, which I will save for later! In summary, I had a guide who spoke a different language, had a reckless disregard for risk management on our ascent, and was clearly clueless about where we needed to go on the descent. This episode taught me to pay better attention when wandering into mountainous and highly forested surroundings with someone who you think knows where they are going, but actually doesn’t.

The result: I was lost on a mountain in the dark with my guide.

Fortunately, I’d had the good sense on this occasion to bring a torch with me, as the sounds of various creatures formed a cacophony around us, and my guide looked increasingly alarmed. The problem had been that we had gone down the wrong side of the mountain, where it met the water. Consequently, we had then needed to climb back up, in order to get back down somewhere near the car, when suddenly night descended upon us.

After hours of fun on a dark mountain we inexplicably ran into a group of locals. These hero’s led us seamlessly to where we needed to be. I have no idea what would have happened to me and my guide that night had we not met these people, but I suspect it would not have been good!

I recently came into contact with The Walking Dead.

In my downtime I will often watch an episode or two of a box set that has been recommended by a friend. I credit Bobby Gill with this one! Whilst gratuitously violent, in an extreme stress management sort of way, it did lead me to seriously question: what would I be capable of under such circumstances? The truth is that I hope I never get to find out! What I would actually do, I could only speculate. I will never really know. This TED talk by Philip Zimbardo really helped me to understand the psychology of good and evil, in practical terms on this planet.

If you have 23 minutes, and a strong stomach; I suggest you spend it here. If not, go straight to 21.12 of the video and watch the end.

Are you ready to be a hero?

To the group of people who guided me and my guide out of the mountain jungle that night, my heart goes out to you. I may not have been a hero, but I did stand up to some awful practices during my years as a nurse. Standing up to the system can be a lonely place, as I have experienced. It was inevitably why I eventually left my nursing career.

What happens in the world for most of us is beyond our control. How you live your life, treat others and negotiate life’s stressors is entirely up to you. However, the only thing that really matters is what you do or think in this moment.

If those thoughts can guide your actions to make the world a little better today, that’s a huge step in the right direction.