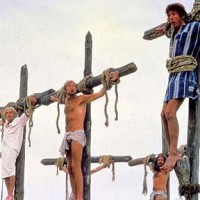 When I was 5 years-old my dad let me watch Monty Python and The Holy Grail.

By the time the Black Knight had lost his second arm he had to stop the video, because I was laughing so much that I couldn’t breathe. It was a fun initiation into facing dismemberment. A few years later when I’d finished watching The Life of Brian, my experience of the final curtain was all rather amusing.

Fast forward a decade and I found myself as a student nurse on a medical ward.

Gary had come in for a few tests following some pain in his stomach. Because he was running his own business, he had ignored the persistent symptoms for several months. There were far more important things to focus on, like making the business work, paying the bills, and ensuring his family were going to be alright.

I spent time chatting to him as he waited for the results. He had also stopped going out with his family and friends for the last few months because he had been caught in his business, and was determined to make it more successful than it already was.

Gary’s main issue was that he needed to get back to work as soon as possible.

Over the few days he was waiting to have the results confirm the diagnosis, we chatted about his life. He had put himself under enormous pressure to increase the profitability of his business, and been working long hours for the past few months to make this happen. It was the first time he hadn’t been working for months, and he was eager to get back.

Then came the news that he had advanced stage stomach cancer, which had spread to his liver, and he was told he would be dead within 3 weeks.

He was 51 years old, and had not ever considered death until that moment.

Gary wanted to know if he had any hope. This is a common response to terminal news. I have yet to meet anyone in this situation who didn’t look for hope when they finally, and inevitably, stare death in the face. It also proved to be anything but the happy Monty Python experience I been led to believe (not that I had ever seriously contemplated this seriously until that moment).

My experience is that many people only question what is truly important in life when death becomes a distinct possibility.

Gary’s search for meaning in his life is something everyone will have to face one day. It may only be for a split second, or for the drawn out deterioration of the body during the ageing process. Spoiler alert: that is what your life boils down to.

One day in the future you will probably find yourself looking back at a photo of yourself now and be a little bit sad that you no longer have the looks and fitness that you have at the moment. A common theme is people reflecting on why they didn’t make the most of their life when they had the health to enjoy it. It’s likely that you would gladly trade your life for just one day, or even an hour to be as you are now, as many people in a care of the elderly ward get to contemplate.

What would you do with that hour?

If you take a moment to ponder this now, you will save yourself a lot pain when The Grim Reaper finally knocks on your door. If he visited you today and gave you a deadline, what is the first thing you would do? (Assuming you had maintained bladder and bowel control). Often it takes people to face death before they truly come to life. Because I have seen so many people leave it so late to question the purpose of their existence, maybe by reading this, you will start to appreciate what you already have a little bit more, rather than focussing on things that will not matter much, if at all, when death eventually rears it’s ugly head. This was a common theme for most people I worked with in this area.

My experience is that death is a wake up call for life. Unfortunately, most people who I spoke to at the end had failed to truly realise that life is not a dress rehearsal, and wished they had made more of it. Not being happier, having more fun and taking more chances are common regrets for those at the end of their lives. There is little fun in death, but whilst you are alive, there is plenty of opportunity to make the most of it.

In the words of the great philosopher Monty Python: “Always look on the bright side of death. Just… “ (but preferably Well) ”…before you draw your terminal breath!”