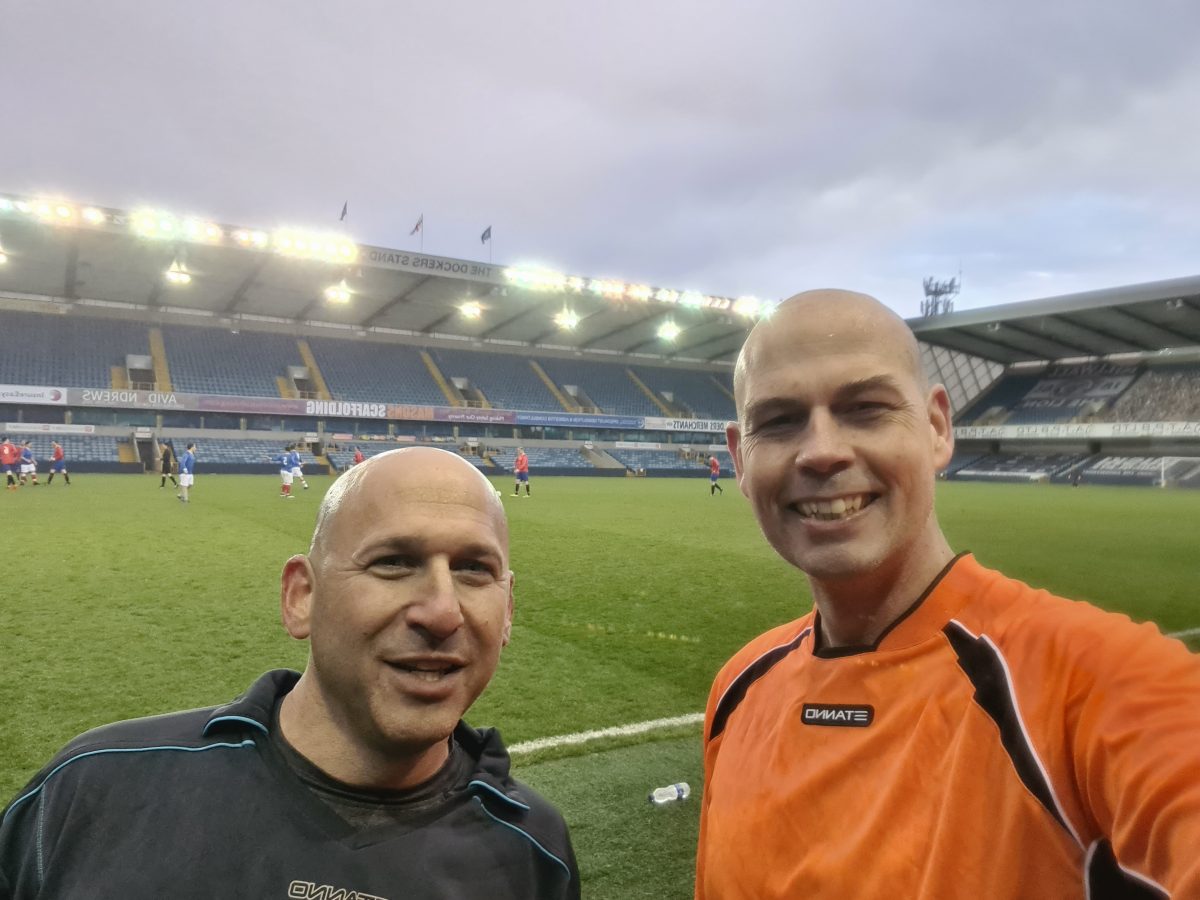 After spending most of the year cooped up indoors at the neglect of my diet and exercise routine, I knew I wasn’t ready for this.

The thought to me was ridiculous.

3 weeks ago I had my first 5 a side football run out this year and at the end of it I could hardly breathe. From a few gentle walks to 5 a side football is a foolish endeavour at any age. Having just hit 49 years old and not done anything beyond walking all year: it has been a harsh transition back.

Add a dead leg that I have not been able to shift since 3 weeks ago and I stood firm in my opinion that I was not ready for an 11 a side tournament with ex-professional footballers.

When my friend Craig invited me to this tournament at Millwall FC, I did everything I could to get out of it as I knew it wasn’t sensible.

However, every objection that I made was met with a wave of optimism that I would be alright. He even offered to pick me up and drop me off, leaving me with little choice but to just do it!

In an event arranged by Steve Surridge, he had arranged 3 ex-Premiership players to join 3 teams in the tournament: David Howells, Steve Sedgley and Jeremie Aliadiere. The 3 teams in question had all played together before.

Our team was the only one with no ex-premiership players and a team that had never played together before. It’s fair to say that I never had any realistic idea that we were in it to win it!

My goal for the day was very different: I just wanted to finish the tournament and have a good day out.

We were the Dutch team and in the first game we played Spain.

We started ok and even held our own for a while but the Spanish team had us on speed, skill, youth and knowledge of each-other’s playing styles. With that in mind we held well, conceding just a couple of goals and missing a few of our own.

It was a respectable start under the circumstances.

We played our second game straight after where we played a strong and rested French team.

I never rated Jeremie Aliadiere as a Premiership great but he spent his time making me and my fellow defenders look ridiculous. It was like playing against a footballing Roadrunner! We did well to keep the score down (I think it was 4), and even scored a goal of our own.

Near the end of the first half I was standing ready to pass the ball out of defence and in came a very strong challenge that twisted my knee. I knew it was going to hurt so I substituted myself off the pitch.

It was very apparent that my state of general fitness and health was as reduced as it’s ever been in my football playing days.

Despite me knowing that it wasn’t a good idea, I played the second half of our 3rd place playoff with England. Here we fell to a freak goal to hand us the wooden spoon.

So why am I telling you this?

I’ve never entered a football game where I didn’t think we could get a result before, but this was different. This set of circumstances had a different set of expectations. COVID has changed many things!

Not going out had been so normal for so long that I had resisted the invite to get out initially. However, the drinks and chats after were fabulous. I met some great people, united in our date with adversity.

Last night the pain in my knee led me to some sleepless hours and cancelling my 5 a side commitments for the next week. However, at least I can now say that I have played against ex-Premiership opposition and laughed to tell the tail.

As with most things in life: it’s not whether things are going to be bad at times, it’s about who you find yourself there with that matters. Good people in a bad situation is always preferable to bad people in a good one. Nursing taught me that.

It also taught me that the Robocop-like walk I have today is no surprise given the circumstances presented.

A huge thank you to Steve Surridge for organising this and to Craig Lesser for not taking no for an answer. It was great to chat and have a drink after with my team for the day and meet so many good people.

However bad things were for me, Craig had to live with standing still as the spectacular winning goal in our last match sailed over his head and into the goal. He thought it was going over!

We win some, we lose some. But during a global pandemic and extreme conditions, I had my first great day out in London all year.

4 thoughts on “Almost Normal – Being Unfit, Entering a Tournament With Ex-Professional Footballers and a Very Sore Knee”