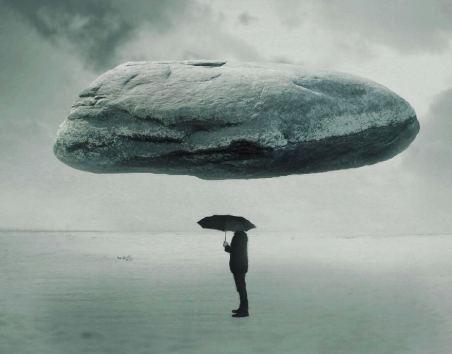 I wonder what aspect of networking or pitching that I could talk about and usually a story appears to illustrate the point that I want to make, which is usually to do with business. However, today’s post is a little different, though I will still make a gratuitous loop back to networking.

Here I saw all sorts of unfortunate cases of people being dealt a sucker punch by life as their health takes a downward turn. Heart attacks, strokes, and cancer were the three that I saw most frequently. I got to sit with stunned, sometimes quite angry people asking the question: “Why me?” “What did I do to deserve this?”

Let’s take the case of Malcolm

This case is one of many similar ones that I witnessed personally. Malcolm had worked in a city career for all of his working life. He had become a senior manager at the bank that he worked for. His dedication to his job, lengthy hours and career progression had finally cost him his marriage two years earlier. The consolation for him was a nice nest egg for his retirement.

A week earlier he had been made redundant

This was surely the move that he had been looking forward to all of his life? However, when Monday came and he was awake at 5am as usual, he suddenly realised that he was no longer surrounded by people to support him and do what he asked of them, and he wasn’t quite sure what to do with himself. That week he had a stroke and that’s how we met.

He had just regained the ability to speak when I was assigned to look after him, and he wasn’t very chatty at first. In fact, it’s fair to say that on first impressions, I was happy with that. When he did speak it felt like he was barking orders in an ungrateful way. It was not a great start.

All of his life he had been saving for a “Happy retirement.” He had believed that if there was enough money in the bank that it would most certainly be a happy one. However, without someone to share it with, strained relations with his children as a result and the inability to stand on his own due to the stroke, things were looking less than happy.

As a top earner, he was now faced with the prospect that all his happy retirement fund was going to get him was a place in a care home that he would now need

This was clearly devastating for him as his illusion of his life fell apart in front of me. So many times I saw this: people sacrificing the healthiest years of their lives in jobs that they were not overly passionate about, with the hope that happiness would come in the future. His friendships at work had turned out to be acquaintances as Malcolm watched his network virtually die with his departure from the firm.

Your network matters, and not just for business

If the people who you are meeting regularly for business purposes are not people who you would want to spend time with outside of work, then this same house of cards may be waiting for you. This is why our network focuses on the people first and what they do a very distant second. If you don’t like the people in your network, fun can be a forgotten luxury as happiness gets moved to the future.

One day you will look back at your life and ask yourself: what was its purpose?

Only then do most people realise that they wasted a lot of time and energy doing things they didn’t want to do with people they didn’t like. Often this comes at the cost of missing opportunities to spend time with real friends and people who you love.

If networking is part of your business, and you are not enjoying the experience, why not do something different? You may even enjoy it

If you want to see how business and fun can mix, you are welcome to see for yourself…