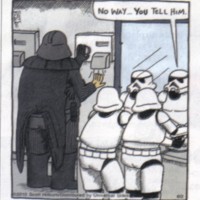 Since the beginning of records, and probably well before that, human beings have been killing each other because they don’t agree on one thing or another. Whether it is colour, belief, or location that separates people, there has been no shortage of excuses to go to war. In the UK we were killing each other long before, and in-between other raging hoards from overseas invading us. Fortunately, we have not been conquered on our little island for almost a thousand years now, since William and his recruits plunged an arrow in Harold’s eye, just days after he had repelled the Vikings. Then we became better at sailing and the rest of the world paid the price for a time. But what does that make me?

If you grow old and die naturally, you will definitely need this phrase at some point:

“Sorry nurse, I’ve had a little accident! Can you clean me up please?”

Will it really matter what someone looks like or what they believe in if they are prepared to clean up your s**t?

Old age is a humbling process that will happen to everyone who makes it that far. The alternatives to this are generally not very nice. I’ve met good and not so good people from many beliefs, and I have cleaned up my fair share of s**t during my nursing days. It does not matter to me what you look like, or believe in; if you ever reach a time when you are in the s**t I will do my best to help you if I happen to be around. Unless you are not very nice. As a nurse it was my duty to clean up even those who were not overly appreciative. Now I am my own boss, I no longer have to.

I hear this phrase often, but what does it really mean? This is where war and s**t meet. Whatever else is going on, if nobody is making an immediate threat to my life or s**tting themselves, that has to be at least two things in my life to be grateful for now.

You won’t feel positive all of the time

You can, however, question your life, and what is really important to you. If you want to make more sense of your life, start by asking yourself “What would make you feel happier right now?”

If you don’t yet know, The Lunatic Gene will help you.

Tag Tags does, gene, help, life, Lunatic, Make, Sense, the, Will, your