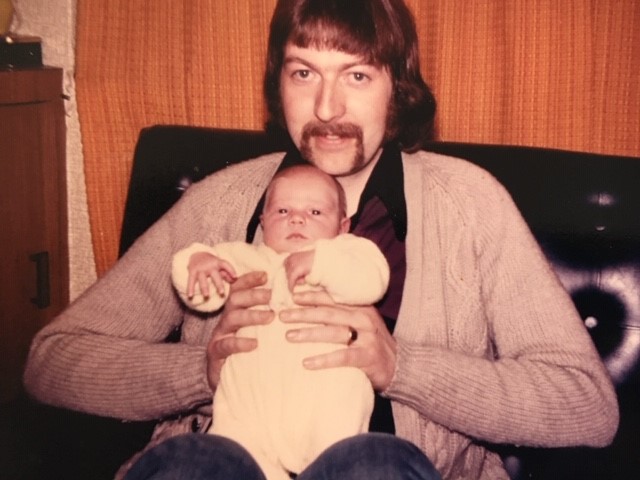 “If a genie ever gives you one wish, always ask for luck.”

The above quote was the most sage advice my dad ever gave me.

Born during a war, in a war zone to a string of war hero’s.

His grandfather won the Military Cross and his father won the Distinguished Flying Cross for navigating 35 missions with Bomber Command during the Second World War.

But my dad had little desire to go to war.

When a drink and a chat seemed like a better idea

Dad used humour as his weapon to navigate nights out on both the Catholic and Protestant sides of Belfast during the height of the troubles.

This was facilitated by a bond between my grandfather and his friend, Niall.

Niall converted religion for love and my dad grew up calling him Uncle Niall.

The consequence was that when my dad was out in the Catholic part of town and the questions started coming his way to find out whose side he was on, he simply asked Michael how Uncle Niall was and he was instantly accepted.

Dad partied with both Catholics and Protestants as Belfast turned into a war zone.

I once asked him why he left Belfast in the late 60’s.

He told me, “The 60’s was about peace and love, son. I wanted some of that and Belfast didn’t seem like the place to be.”

It seemed an obvious answer to a stupid question.

He came to England, met my mum, had me and my sister and became a psychiatric nurse.

On reflecting on his career in psychiatry he told me that his psychiatric nurse training taught him nothing that he didn’t learn growing up on the streets of Belfast!

He had many stories to back this up.

You can be the best person in the world.

With the most polite manner.

And the most impressive array of communication methods.

But there will always be times in life when this is not enough.

Those are the moments where life hangs in the balance.

And you get to question the higher power that guides you.

And ask for their help.

During these moments, with severe doubts about God, dad found luck.

Ultimately, luck is the component that unites all of these forces into a universal norm.

And, according to Dr Richard Wiseman who has studied luck for many years, luck is a mindset that can be taught.

Through my experience of working with those at the end of their lives and reflecting on the many stories that my dad shared which could have easily played out with fatal consequences, here is what I have taken away:

They are belief systems used to either make you a good person to know.

It all depends on the expectations of those holding the beliefs.

Dad never encouraged me to go to church.

As his experience of this was divisive and intolerant.

Every group, belief system and society contains both good and bad.

Human nature is good and bad.

And some we don’t.

We have all done good things.

Accepting the darker side of our personality is a big part of the personal development journey.

I have certainly done my fair share of things I wasn’t proud of.

But would like to think I have learned from them to make me a better person today.

There are not many, if any, people who are all good or all bad.

We all spend time on both sides of that fence.

Some situations in life benefit from tapping into a darker energy.

But there is a big difference between accessing this zone when your back is against the wall, and choosing to stay there when it isn’t.

And that’s where luck comes in.

As Napoleon is quoted to have said: “Don’t bring me good generals, bring me lucky ones.”

Luck is the universal force that keeps you alive when circumstances put you into a crisis.

Luck is the energy that makes you grateful to be alive.

Luck is a belief system that has the power to unite all people and religions.

What some call divine, I call lucky.

Does that make me an atheist, or agnostic?

I don’t really care what anyone else thinks about that.

I accept myself as I am.

And if that works for you, I’ll accept whatever you believe as long as we can talk reasonably.

And maybe have a laugh.

I am lucky when it counts.

A few brushes with death would indicate this.

So, do you feel lucky?

Because whether you believe you are lucky, or not; you are right.

And that’s why asking for luck is always a good idea.

And my dad’s best advice/philosophy is worth sharing.