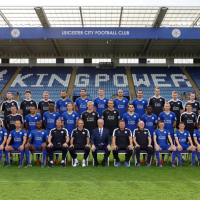 There surely cannot be a football fan in the country outside of Tottenham today who isn’t willing Leicester to win the league.

As a trainer in team-building, the dynamic and story of Leicester City this season yields a few valuable lessons, along with a story that reads like a fairytale.

I was going to wait until this year’s winners are confirmed, but I couldn’t help myself! With Leicester so tantalizingly close, it is worth even non-football fans tuning into today’s game against Manchester United, which if Leicester win, will see them crowned as Premier League champions.

Team building is about getting everyone functioning more harmoniously, creating a synergistic effect on their happiness, productivity and results. What Leicester have done this season in that regard is nothing short of a miracle. Lets take a look at some of the factors that have led to this.

I can confidently say that nobody, even the Leicester team, could have seen this one coming.

They were 5000-1 outsiders at the start of the season. To give this perspective, the odds of Arsenal sacking Arsene Wenger and giving Piers Morgan the job were only 2,500-1, as was David Cameron to be the next Aston Villa manager. You would have only got 1000-1 on Sir Alex Ferguson winning Strictly Come Dancing, or Jose Mourinho going on I’m a Celebrity!

On the 22nd March 2015 Leicester were bottom of the Premier League, 7 points from safety having won only 4 games from 29, and nobody would have given them a hope of staying in the division. They went on to stage what is widely regarded as the most impressive, and unlikely escape act in Premier league history, to simply stay in the division, winning 7 out of their final 9 games.

They then sacked their manager as his son (also a player at the club) had a rather unfortunate trip to Thailand, bringing the club into disrepute. He was replaced by Claudio Ranieri, who had just been sacked as manager of Greece after losing at home to the Faroe Islands, just a few months into his 2 year contract.

Consequently, at 5000-1 not many people would have given Leicester much chance of staying in the league. Winning it was unthinkable for most.

Their entire squad was put together for just over £54M. For the record, this was the price Manchester City paid for just one player: Kevin De Bruyne (their squad, by comparison cost £418.8M).

There have only been 5 previous winners of what is now called the Premier League, which commenced in the 1992-93 season, all of which have been clubs with big money who were expected to win it, or at least finish in the top 3 places. Usually, the top 4 places of the league have been all too predictable since the league’s conception.

So what has happened this season to cause this?

The players will tell you how Claudio Ranieri’s relaxed approach to management has inspired them all to raise their game. Jamie Vardy, who was playing non-league football in the 2011-12 season, and who only scored 5 goals in 34 games last season, is now sitting 3rd in the table of Premier League top scorers this season, just 2 goals off the top, with 22 goals. His scoring partner, and recent player of the year, Riyad Mahrez sits 5th in this table, with 17 goals.

However, the interesting statistic is their assist stats. Between the top 5 players on the current table there have been a combined total of 26 assists. 17 of these have come from the 2 Leicester players. Their unselfish play has been a theme of their entire season, constantly looking to play each other in, when most strikers simply lock their sites on goal and shoot.

Consequently, the rest of the team has raised their game.

Kasper Schmeichel, living in the shadow of his dad, arguably the best goalkeeper ever, was released from Leeds United in 2011 after being told that he didn’t make the grade. Whatever Ranieri has inspired within him, has certainly worked. Pivotal defender, and team captain, Robert Huth, was unable to get back into the Stoke team after a year out with a knee injury in 2013-14. Another rejected player picked up by Leicester, with a point to prove, which he has clearly done this season.

I could go through the whole squad – they are all worthy of a mention, however there will almost certainly be a film made about this, so I will refrain for now.

Leicester City are living proof that the power of a strong team dynamic operates way in excess of the individual sum of its parts. It also highlights that previously poor-performing teams can be improved incredibly with the right interventions. Leicester’s achievements this season are because of what they have done in building their team dynamic, and nurturing strong relationships, and respect for each other.

Whilst I cannot promise that my team-building training will get the same sort of results as Leicester City, I can certainly guarantee that it will improve productivity and relationships within it, as has been shown by the feedback I have received.

If you are not investing in the harmony of your team, you are most definitely missing a trick, as Leicester City have proved.