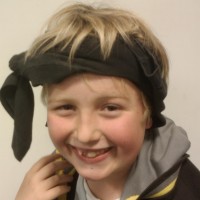 Head banging, a fountain of blood and a trip down memory lane.

On Sunday I was around my dad’s flat with my sister and two nephews. It’s not a particularly big flat but that wouldn’t stop my nephews, Connor and Kian, from doing their thing, which usually involves plenty of running about.

When Connor stepped backwards, tripping up over his own feet and fell, head first, towards the glass table I have to say that time froze.

He hit the corner of the table with a force that shook the room. He put his hands to his head and started screaming. Seconds later he looked at his hands to find blood dripping down his arms – and there was plenty of it.

To anyone who has ever been in a situation where you were not sure whether a child was going to be ok, especially one in your family, you will know the panic that goes with it. Blood continued gushing from Connor’s head and I had to act quickly. Fortunately, it was just a few seconds before my old nurse training kicked in and I had pressure on his head over the cut.

As tears rolled down his face and he started to hyperventilate, it was then time for my hypnosis training to enter the equation. When someone is in a state of panic and/or shock they are very susceptible to suggestions. This happens because the conscious mind is distracted and all suggestions can go straight to the unconscious mind. Consequently, it is essential to say positive things.

I kept repeating that everything was going to be alright and to stop bleeding.

No bandages were at hand so it was time to improvise. A towel-roll dressing and one of my dad’s t-shirts were used to dress the cut and we were off to A&E. The last time that I entered A&E in Barnet it was as a nurse, over a decade ago. It’s fair to say that I was not leaving anything to chance. My time working there had led me to believe that I should be vigilant.

We checked in and were seen by a nurse within a few minutes. The fact that she did not take neurological observations for a child with a head injury was the one blot on an otherwise impressive visit. Neurological observations test people’s pupils reactions to light as this is one of the first things that is affected when there is an injury to the brain, along with testing for weakness in any limbs. Fortunately, I had already tested this!

We were seen by a doctor within about 5 minutes, who did perform neurological observations! He also glued up the wound himself. We were leaving within less than an hour of arriving. I had never dreamed that we would be in and out so fast after my previous experiences at Barnet. However, times change.

When we arrived back at my sister and brother-in-law’s house Connor was smiling and looking forward to a day or two off school. He even had the presence of mind to say that at least he didn’t break the table!

Incidents like this highlight a few things for me.

Firstly, be grateful for your family because time is precious and life can deal you some unexpected cards. Everyone has to die one day and you will never know when. Make the most of the time we have with the people who we love.

Secondly, if ever you find yourself in a situation where someone that you love has a potentially serious injury, be sure to stay as calm as you can on the outside, regardless what terror is running through you on the inside, and keep repeating positive things: “Everything is going to be alright.”

Whether it is or not, this will optimise your chances of a favourable outcome significantly. As I write this I am very grateful that Connor is well, if a little sore and that I was there to help.