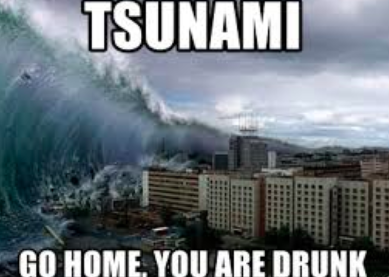 It was Christmas Day, 2004 when ‘The Skipper’ and I decided that we were going to go for it this Christmas

We first met in Thailand back in 1998. It had the final stage of a 19-month backpacking trip, which had yielded some very memorable experiences. I had travelled with 6 friends: 4 were Irish and an Englishman who liked a drink. We were the party crowd of South-East Asia for almost 6 months.

I also have an Irish dad, and he definitely likes a drink!

Irish weddings are legendary and Irish wakes, more so. 4 days of drinking followed my Grandfather’s death. And he had the whole ward laughing the night before he went to sleep and never woke up. He was 94 and flew 35 missions in Bomber Command during World War 2. His first 8 missions were over Berlin. He gave up drinking over 50 times in the last 5 years of his life.

But I digress: Most Irish people that I know enjoy a drink or two. Perhaps a little too much sometimes!

I had a drinking heritage, and that Christmas The Skipper decided that we were going to “Go for it!” Like a gait-response (where part of your body moves without running it by your brain first), I smiled!

With reckless abandon, we went for Christmas lunch. 18 hours later I fell into bed at my beach appartment. I do not remember getting home that morning, or details of my final hours of drinking. But I was informed by The Skipper that it was light when we got back.

I remember waking up to The Skipper shouting at his mum on the phone from his room, next door. She had asked him if he was alright. He told her that of course he wasn’t alright. He’d only been in bed for less than 2 hours before she called. He swiftly calmed down and just as swiftly I drifted back to sleep, feeling very rough indeed. In a scene that Withnail would have been proud of, I was not a pretty sight, and my head was not exactly in a clear space.

A few minutes later The Skipper appeared, “Get up fella, there’s been a Tsunami.”

“I know Skipper: A tsunami of booze last night!”

“No really. Get up and watch the news.”

I slumped out of bed with the enthusiasm of a lamb lining up for the slaughterhouse and slowly walked in the lounge to hear news of the tsunami. By luck we had chosen an island the right side of the Thai peninsula. My cousin had been caught on Phuket, which is a fair description of what she must have been thinking about her choice of islands!

I realised that this was a close call and if it had hit, I was less than 50 metres from the coast. I would have probably drowned before realising what was going on if it had hit. This was a tipping point. I had heard stories of those who went on meditation retreats in Thailand. There was one nearby in Suan Mokh. I had put it off since first hearing about it, 6 years earlier.

The sales pitch was not exactly enticing. Back in December 1998 I had been told by an enthusiastic attendee that “It was the best thing I’ve done.” The pitch started well but then went rapidly downhill when I was foolish enough to ask, “What did you do there?”

“A bell goes at 4am and you have 30 mins to get to morning meditation. After that you do some yoga, have breakfast and do some chores. Then there is more meditation, dharma talks and chanting. You must be silent the whole time. No phones, no books, no pens. Nothing, except you and your thoughts.”

Just when I thought it had hit rock bottom, he was now to give me the clincher: “You sleep on a bamboo mat, placed on a concrete bed, with a blanket, mosquito net and a wooden pillow.”

It had been well parked 6 years earlier into the It sounds like a great experience, but it’s not a priority just now box. I now decided that I would do it

On New Year’s Eve a disconsolate Skipper sat in disbelief as his drinking buddy had decided to go to a silent meditation retreat on one of the best drinking nights of the year. My mind was made up. I needed to sort my head out….and it definitely needed and still does need sorting out every now and again!

The last thing I remember from The Skipper was “You can’t keep your mouth shut for 10 minutes, let alone 10 days. I’ll see you at the bar tomorrow, and I’ll buy you a drink.” This comment was to play a big part in the next couple of weeks.

I took an 8-hour journey on motorcycle, boat and rickety bus, eventually being off-loaded in what seemed a different planet to the one I had been on. This was more like a Star Trek first encounter than a trip to a temple for me. In my stubborn determination that this was going to be my induction to meditation I had failed miserably to consider the calibre of people who would be prefer to be there than in a busy bar on a party island on New Year’s Eve. I was surrounded by the very advanced meditation class, and I was a beginner.

The detailed unfoldment of extreme discomfort, which stretched my threshold for pain each day is another story in itself, but for the sake of relative brevity I shall park that series of unfortunate events and skip nearer to the point.

When tragedy comes, some people give money. Some people give more: They give their time to help. The best thing that we can do is give it our energy. Our energy is our thoughts, and we meditate on this. This is not verbatim, just my memory of the teaching, which made sense there.

After 8 days of self-mutilation, constantly sitting in silence and stretching my pain threshold, motivated solely by The Skipper’s parting shot, I finally got it

On day 9 I had my breakthrough. I decided to see how much I could slow down my breathing. In a 30 minute meditation, I counted 23 breaths. At the end I realised I hadn’t even felt any pain. I wanted to stay in the position and continue. It was the first and only time that happened to me in the 10 days of silence.

It took me many years to synthesise the simplicity of this concept. Your time is valuable. Too valuable to fill with too much meaningless activity, or regret. The monk told us to meditate on impermanence. This is the only guarantee of life, because death comes to us all. We help others more when our own minds are calm.

In order to help anyone else, you must first work on yourself

Our mental health is directly related to our ability to embrace the impermanence of life. My journey to this conclusion was a painful one. Because of this, I aim to make business networking a place where not only business gets done, but people enjoy spending time at. And The Irish part of me helps with that.

I decided to give up drinking for a year after that. I set the goal at the retreat and could quite possibly have been the only sober bar manager in Koh Samui, if not Thailand. I set the goal and stuck to it, to the great dismay of The Skipper. I drink less these days, much less. I’m definitely no angel and on the odd occasion I do have a few more than are strictly necessary when I’m out with my friends, especially the Irish ones! However, you are more likely to find me drinking coffee or water at these events.

I did 4 silent meditation retreats when I lived in Thailand and it was definitely the single most powerful intervention I ever did for my mental health, but curiously enough, I haven’t yet booked a ticket back

I prefer to spend my time networking with people I like, who are good with people and understand that building friendships in business takes time. Time is your true currency, why not spend it experiencing a different way of networking for your business?

Nature may be kind to us here in London, but just incase it isn’t, why not have at least 1 fun memory of networking for your business?

I may even tell you how I got locked in a room at one silent retreat.

Your first event’s free, and The Skipper probably won’t be there. Because I haven’t been brave enough to invite him along yet. But he lives in Ireland anyway and I’ll be meeting him next month in Spain for a friend’s wedding. They are Irish too!