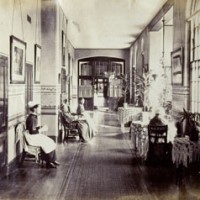 Before my first birthday I was moved into the staff housing with them, on-site of the psychiatric hospital that they worked in. This was my playground for the next 17 years of my life. It taught me many things.

My early memories include psychiatric patients wandering down to our house in their pyjamas or nightgowns knocking on our door and gesturing for cigarettes. I also witnessed our front garden get left a few deposits from some patients caught short on their ventures for cigarettes. I once called this normal, as I knew no different.

Life Lesson 1: Be Careful When Judging Others – You Rarely Know The Full Story

I remember watching an old woman walk aimlessly around the hospital and thinking to myself as a kid that she must be really nuts. Finding out a bit more information on why she had been admitted, and what particular brand of lunacy she had displayed in order to be sectioned, I discovered she had become pregnant outside of marriage, back in the 1920’s.

Back then this heinous offence was deemed worthy of being sent to the asylum. She had her baby taken away, was sectioned and filled with drugs. This status quo had remained in place for the next 50+ years before I saw the shell of a woman that now wandered in front of me.

If that law was in place today, how many people do you know who would now be the other side of the psychiatric divide? And who wouldn’t be driven insane by a society that could do that?

Life Lesson 2: The World is Full of Insanity

Within a psychiatric institution anyone intending to do damage to themselves or others was either sectioned, sedated, or electrocuted. Often a combination. Then they were allowed to wander around in the hospital grounds, which were often very peaceful. Me and my friends would spend hours tracking their movements. Some of the patients had been there for over 60 years.

I spent my childhood believing that we lived on a relatively sane planet, with small pockets of insanity. However, it wasn’t until I left the hospital after 17 years that I realised that I had been duped. Outside of the asylum was a far more dangerous place than anything in it. Outside anyone can harm themselves or others, or even rule an army and start a war.

This was a startling revelation. The reality is that life in a lunatic asylum may be a long way from ideal, but it was the safest place I ever lived. I believe we actually live in a lunatic asylum, with small pockets of relative sanity, which are the psychiatric institutions (though I have no desire to ever set foot in another!)

The insanity amplified in the 90’s with the government’s Care in The Community programme. This happened shortly after the M25 appeared less than a mile from the hospital, and land prices shot up. It was at this stage that it was deemed appropriate to shut down most of the 5 psychiatric hospitals in the area (yes, there were 5 within a 5 mile radius of where I grew up). The patients were moved out into the community and plenty of land was then available to build houses and make profit for someone.

The wellbeing of the patients, many of whom were well institutionalised, proved to be a secondary concern as they were moved into small pockets of the community, where neighbours would complain about them wandering in the neighbourhood. Suicide amongst patients increased, and the problem was solved.

We live in a lunatic asylum!

Life Lesson 3: Everyone has a Lunatic Gene

Everyone defines insanity differently. Whilst traditional definitions lead to the profiles of the residents of your average psychiatric institution, what about the other form of insanity of people who faced seemingly impossible tasks and kept bouncing back?

Think Nelson Mandela, Gandhi, Mother Teresa, Thomas Edison, and JK Rowling. Each of these faced numerous setbacks and negativity, remaining positive throughout and maintaining belief in themselves when life threw them some difficult cards. For this reason, The Lunatic Gene has the potential to earn you poor health and a place in a lunatic asylum, or propel you to incredible success, and a higher purpose with your life.

We all have a Lunatic Gene, the only question is: how does yours come out to play?

I have written a book about The Lunatic Gene, and how to make sense of your life, which you can find here.